'Parallelism'
and
the 'Parallel Instruction theory'

The ideas about parallelism and behind the ' PI-theory' are not only based - as it looks - on multi windowing principles and desktop concepts, but our theory is based on some strange aspects of our memory. A lot of users don't like computers, hypermedia or web-media because they lost there way - and information - in hyperspace. They want to have much better overviews about what they are doing in computer- of web-based working- or leaning-environments. The screen of a PC is a terrible small viewport. So our theory is a design theory. In our kind of learning- or working- environments the student can see the model behaviour in the (open) simulation program simultanious with the instructional materials (both parallel); to see and compare the effects. A good designed program (for instance a simulation program) should also allow the student to change the model parameters and to monitor the variables at other window at the same time.

The problem of implementing this theory is that it was very hard to implement this in the hardware. It is technically very difficult to open two (running) windows at the same time. Therefor nine years ago (1986) the first system for designing simulations was developed. The years after there was a lot of research with this design and on the computer simulations it produced. Now we have a new system for building web-based software.

Schematic you see in scheme 1, a simulation based open 'learning environment' with a lot of 'parallel' windows even 'parallel' paper-stuff. As we say: "All in view" and "all under control".

The advantage of computer simulations is known: students can experiment with almost real situations without the dangers that experimenting always includes. The PI-theory is very usefull for building simulation environments in relation to instructional materials because it can combine the advantages of learning by experiences (open two-ways environments) and the most natural way to handel instructional and help information (one-way environments).

For educational designers the concepts of the PI-theory are a wurthfull asset in their knowledge how to design learning environments. Therefor we want you to have acces to the programs we already developed.

The central research problem studied in this project is how to find theoretical base for the theoretical and fysical distance on the screen and on the desk of the learner between his computer-based problem solving space and the the coaching elements in open working, learning or doing enviroments. We do research how the concept of 'parallelism' and the 'parallel instruction theory' of Min (1992 - 1994) in simultaneous processes can be founded on psychological principles (as bad short time memory and adequate reference guides).

We want to kwow or this will be important not only for simulations but also for other kinds or open learing and working environments especially in training situations and for solving complicated or less complicated tasks. All kinds of perception canals, dimensions of media (text, visuals, audia, etc.) and forms of feedback will be examine. We want to find a way to make digital environments richer and better for all kind of learning profiles. We work together with Holland Signaal in Hengelo (NL) and use their equipment and other things as their VR-room, animation tools, geometric models and skills (Min, 2000)

Scheme: 2. Schematic scheme with the components about 'parallelism' and the 'parallel instruction theory' of Min on the input side and on the output side of a 'learning process'. On the input side of a learning environment a lot of instruction types and/or formats are possible (such as texts, sheets, pictures, manuals, even a walkman-recorder with a instruction tape) and on the output side a lot of model-driven feedback forms (such as growing graphics, model-driven animations, intelligent model-driven 'text-messages' and/or 'video-messages') are possible.

Schematic you see in scheme 2, on the 'input side' of a learning environment you can see a lot of different instruction types (modes of all kinds of instruction, such as texts, sheets, pictures, manuals, even a walkman-recorder with a instruction tape) and on the output side you can see a lot of feedback forms, such as growing graphics, model-driven animations, intelligent model-driven 'text-messages' and/or 'video-messages'.

For all the designers the next designing rule is valid: the a-synchronic, simulatious processes on the 'input side' and on the same on the 'output side' of this kind of learning environments all have to be in view for the user and keep the learning process ruling.

The 'parallel instruction theory' for simulation environments (and in fact for all open working, doing and learning enviroments), in short the 'PI-theory', was discovered, developed and published by Min around 1992. In this theory researchers suppose that a user in an open learning environment can only work and learn if the environment has been designed in such a way that all relevant information to take decisions is 'visible' or can be immediately 'retrieved'. On studying various kinds and large numbers of examples, it turned out time and again that traditionally presented instruction methods yielded better results than solutions provided in a modern way. Experiments with simulations realised within instruction-write-systems and experiments with instruction-write-systems plus simulation systems, showed that there was no long term solution. Simulations with paper instruction materials turned out to function much better at the time, although the reasons were not very clear. In the end we discovered the above mentioned deficiencies of monitors and the software technique used at the time, when carrying out a small but not very successful experiment for AKZO in Hengelo (Van Schaik Zillesen & Gmelich Meijling et al., 1995). Learning environments with a malfunctioning instruction component proved on closer study to have been too sequential in design and too rigidly linked in general. In other words, the instruction was too well 'synchronised with the simulation' and too rigid. Also the instruction text disappeared completely from the screen while one was working with the simulation. It was surprising to see that such a design did not work, for the reverse was so much more obvious. 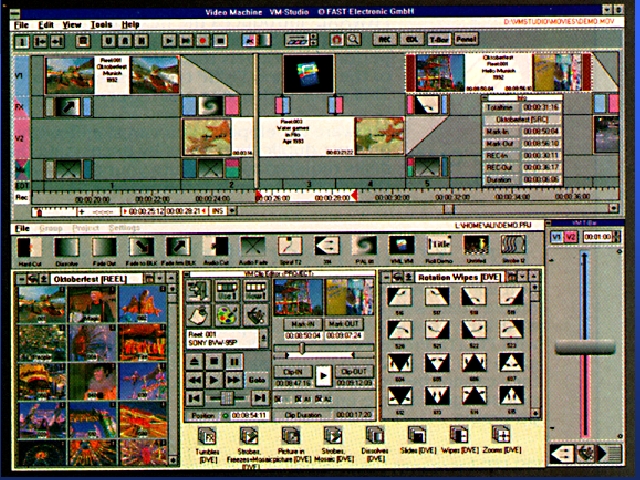 Example 1: A working of doing environment with everything you want (or you think you want) in view: 'first order parallelism'. This kind of parallelism (an 'pan-optimum') is often desirable but seldom good enough for untrained people: you need parallel instruction(s) (Min, 2001)

It is clear that users of educative software like to have all information well-ordered and at hand. They want to be able to see the connection or coherence of things. An example will illustrate this. Large screens are favourite in work situations, which can be compared to learning situations. This is proved by the huge success of SUN work stations. They are sold well to people who can afford them. The price is still a problem however. The fact that large screens are so popular partly proves the ideas found on parallelism. Users want to be able to put relevant information somewhere, preferably on a large screen, so that they can consult it without having to move other relevant information from the screen. Users of screen-oriented work stations have an implicit need to put a lot of information sources or tools side by side as a reference point so that comparisons are possible. This is not merely a laziness of the brain but the result of learning being largely a question of making comparisons and trying to see the coherence. 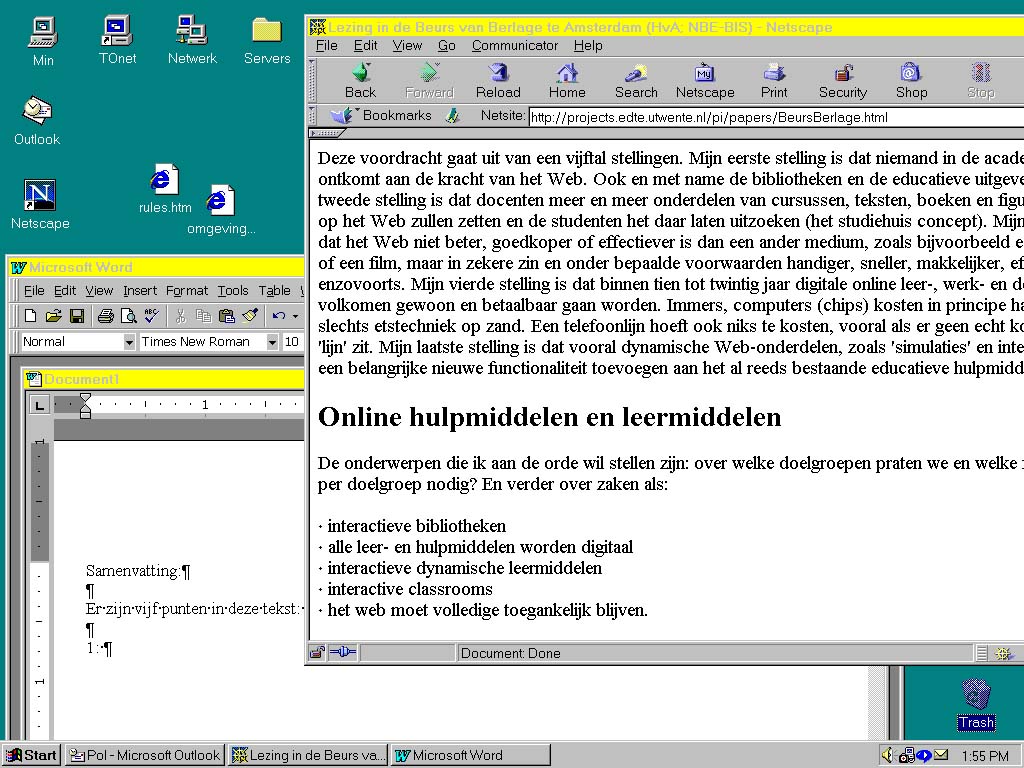 Example 2. Our dailly life: A 'multi windowing' working environment with 'second order parallelism' and at least two (or more) 'a-synchrone' applications (simultanious); par example: a browser, a text processor and/or an mail system. This arrangement allows printing, writing or cutting and pasting texts of movable or sizable windows; until you have everything you need in view (to solve your problem) (Min, 2001)

The PI-theory can be described as follows: When one has to design an open learning- or working-environment, one should do everything within one's power to have all loose components within easy reach and ready for use. They should remain in the position (or state) which they have (or had) at the time. In particular the instruction, feedback, tasks, the solution room, scrapbook etc. should be parallel to the open (bare) learning environment of the simulator. The number of design variables is just as large as the number of qualitative and quantitative obscurities.

The PI-theory in four points: So far it is assumed that the usefulness of parallelism in open do environments is due to:

1. the user's limited short memory as regards details or loose components; because the monitor always wipes out the image contents partly or entirely when the next image is shown;

2. the user wants to, must and can compare; by comparing things from the past physically to things of the present;

3. the user wants to gain insight into cause/result relations; through repeated verification and compare (with other things);

4. the user wants to create his own frame of reference and should be able to do so; by putting things that pass by on the screen side by side (by means of windows) and comparing them.

Further research will have to reveal which psychological variables and design variables play a part for the user and in software. Also why and under which conditions the user will best develop in such an 'environment'. 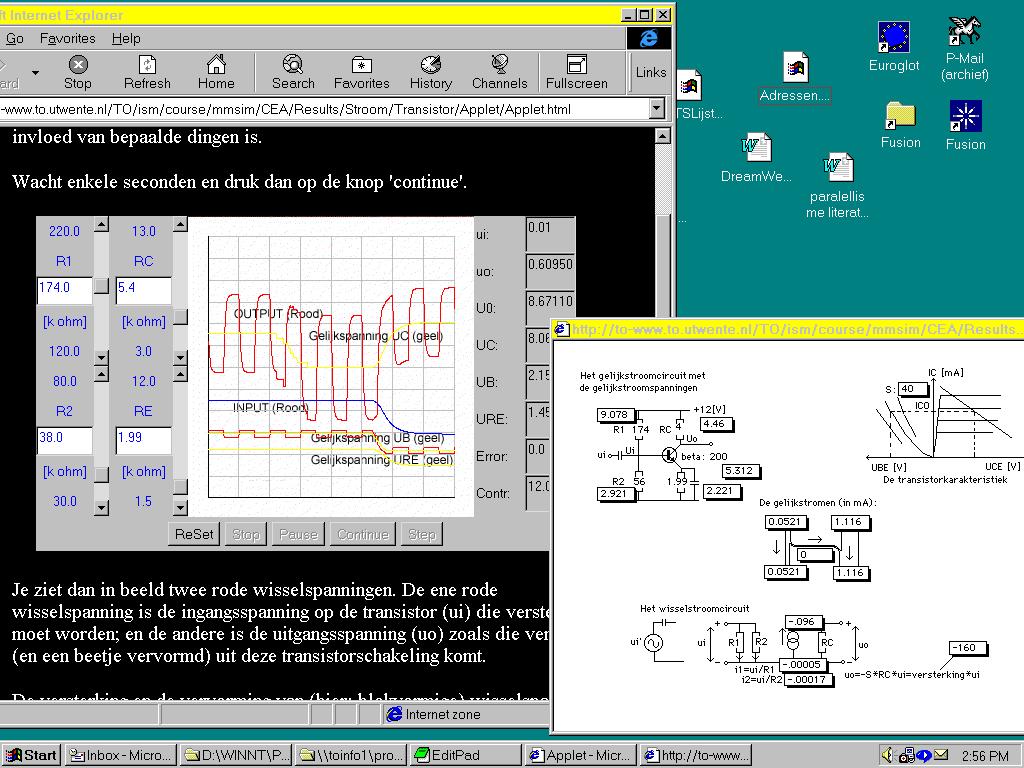 Example 3. A simlation site with TRANSISTOR. The simulator is surrounded by electronic instructions: parallel exercises (here in Dutch), parallel schemes and other parallel cues.

For more information about 'simulation', 'learning environment', 'parallelism' and the 'parallel instruction theory' see on my scientific rapports, papers and my other Web-pages, all via the location: http://users.edte.utwente.nl/min.

Min, F.B.M., P. Kommers, H. Vos and C. van Dijkum (2000)
A Concept Model for Learning; An attempt to define a proper relations scheme between instruction and learning and to establish the dynamics of learning in relation to motivation, intelligence and study-ability ('studeerbaarheid'). J. of Interactive Learning Research (formerly the J. of Artificial Intelligence in Education), Vol. 11, no. 3/4, 2000, p. 485-506.